I’m a computational materials scientist, and naturally, I enjoy programming. Recently, I’ve been thinking about picking up a programming language other than Python to help prepare me for a post-doctoral position at a national lab. I was having a hard time choosing between C++ and Fortran. On the one hand C++ would be pretty useful because it’s the language that LAMMPS is written in and so I could extend LAMMPS to fit my needs. On the other hand, Fortran is used in NASA Glenn’s MAC/GMC code (along with tons of other legacy code) and I would love to work with the micromechanics group at NASA Glenn someday. And then I found Julia which is a programming language designed for parallelism and cloud computing and combines the ease of Python with the speed of C++/Fortran, but it is still in beta (v0.6.3 is the current version). All three would be very useful to have at my disposal. Since I have a lot of time on my hands right now, I’m going to try to learn all three.

The best way to learn a new programming language is not through a course or a book, but by trying to do something with that language. I set out to create simple coin flipping scripts in Julia, C++, Fortran, and Python (for comparison) and then time them all. I also created parallel versions for each language. In this blog post, I will go through each language’s code and then report on the timing of each script.

Below is the Python code.

The random library in Python seems much more developed than the equivalent options in C++ and Fortran, though that could just be speaking to my inexperience with C++ and Fortran. random.getrandbits(1) retrieves a random bit and that bit is then converted into a bool (True or False) and then into an int (1 or 0). 1’s are considered to be heads. Though this code can handle larger numbers than 10E8, all run times are limited to 10E8 due to a RAM limitation in the Fortran code. 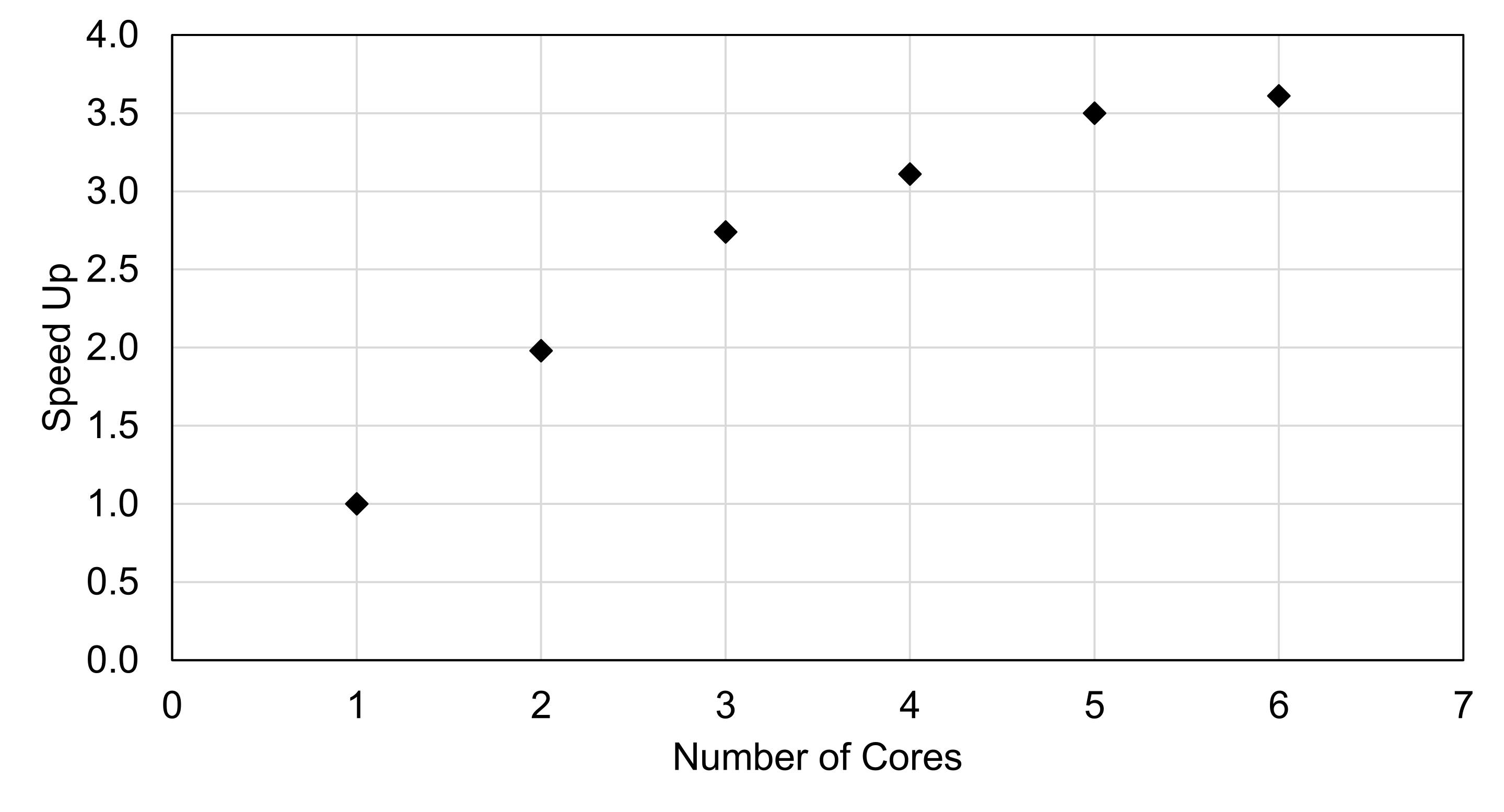 As seen in Table 1, using two cores cuts the run time in half while four cores gives a speedup of three times. It’s interesting that five cores gives another 14 seconds of speedup because hyperthreaded cores are not usually known to benefit parallel programming. The following is dependent on exactly what you’re doing (i.e. int operations vs floating point operations) and your processor architecture, but in general it’s true. A hyperthreaded core has two logical cores that can be scheduled simultaneously, but both cores can’t run instructions at the exact same time because only one core physically exists. So the two logical cores switch back and forth quickly. Generally, high performance computing (HPC) clusters have hyperthreading functionality turned off because the performance of most HPC software is adversely affected with hyperthreading on. Figure 1 shows the speed up as a function of number of cores. There is nearly a linear relationship up to 3 cores, but then the curve levels off.

Below is the Fortran code:

My first draft of this code was written very similarly to the Python code, but it was taking uncharacteristically long for a Fortran program to run. On a single core the code took ~200 seconds and two cores took ~800 seconds to run. The reason was “that calling RANDOM_NUMBER inside a parallel region will introduce lock contention as there is a single seed per program.” The current version of the code is significantly faster as you’ll see in the next table. Unfortunately, generating an array 1x10E8 filled with real numbers takes up a significant amount of RAM (3.8 GB, as seen in task manager on Windows 10) and an array 10E9 would take more RAM than I have. The Fortran code builds an array 10E8 long and populates it with random (real) numbers between 0 and 1. Then it goes through the array and tallies up the heads. One core builds the random array which takes ~3.9 seconds. The timings in Table 2 are the times the code took to tally up the number of heads and not the total time taken by the entire program. 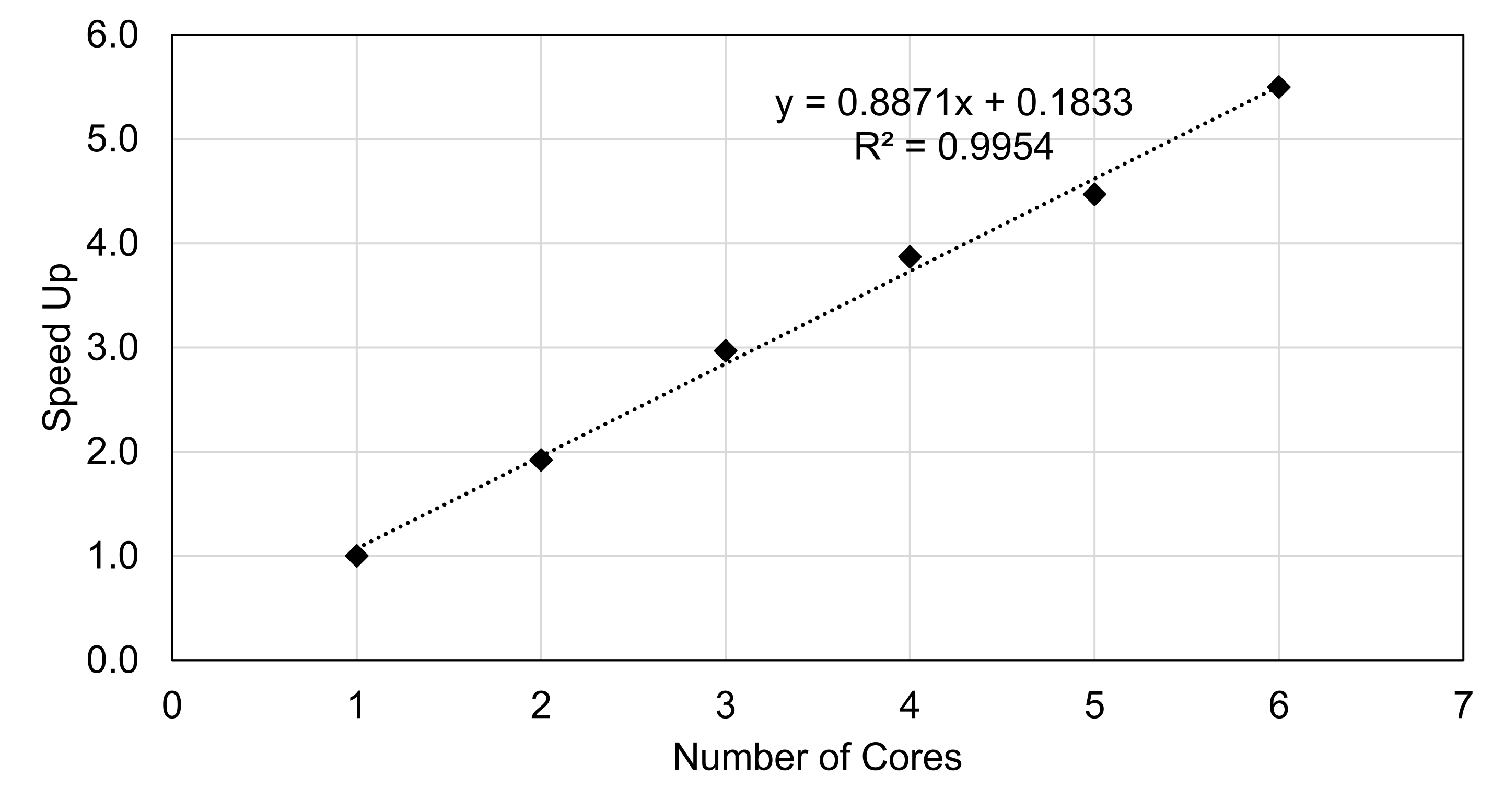 I used Mysticial’s solution for getting the wall time and cpu time of OpenMP C++ code because it was the best solution I could find. This code works similarly to the Python code in that it generates a random integer on each loop. This code was easier to write than the Fortran code since I’ve had some experience coding with C/C++ and OpenMP (and MPI) during two awesome courses I took at Michigan Tech called UN5390/5391 Scientific Computing 1/2 (thanks Gowtham!). There is still room for improvement in the OpenMP sections, but it works well as is. 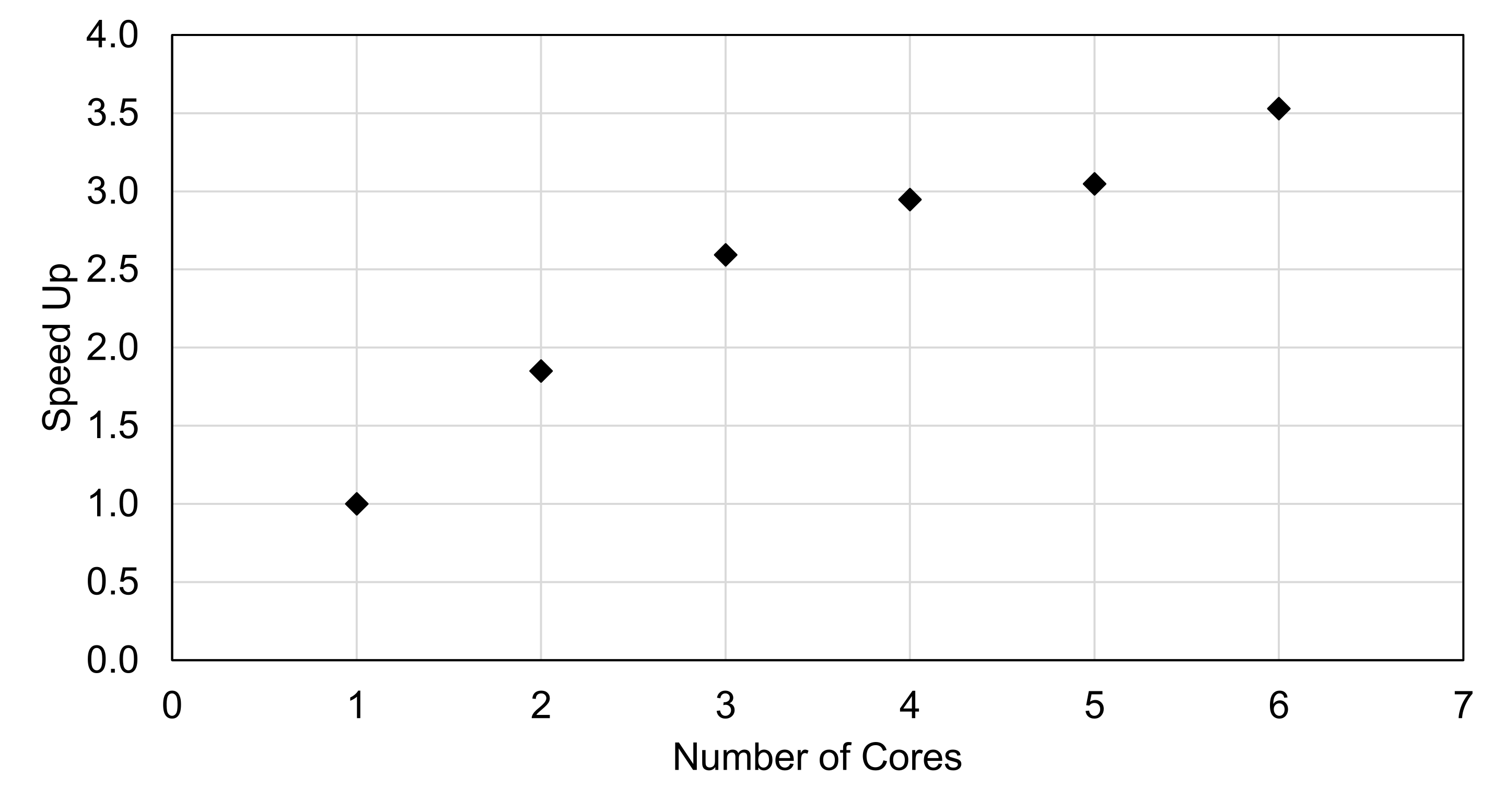 Finally, here is the Julia code:

Julia is an interesting language; it’s easy to learn and very fast. I hope it achieves 1.0 status soon. With this program, I defined two functions: a single core version and a parallel core version. The Python code is actually based on this Julia code. I discovered Julia (and this coin flip algorithm) in an interesting book called Seven More Languages in Seven Weeks: Languages That Are Shaping the Future. Julia is surprisingly the fastest of the four languages I tested. The timings in Table 4 are for the parallel function. 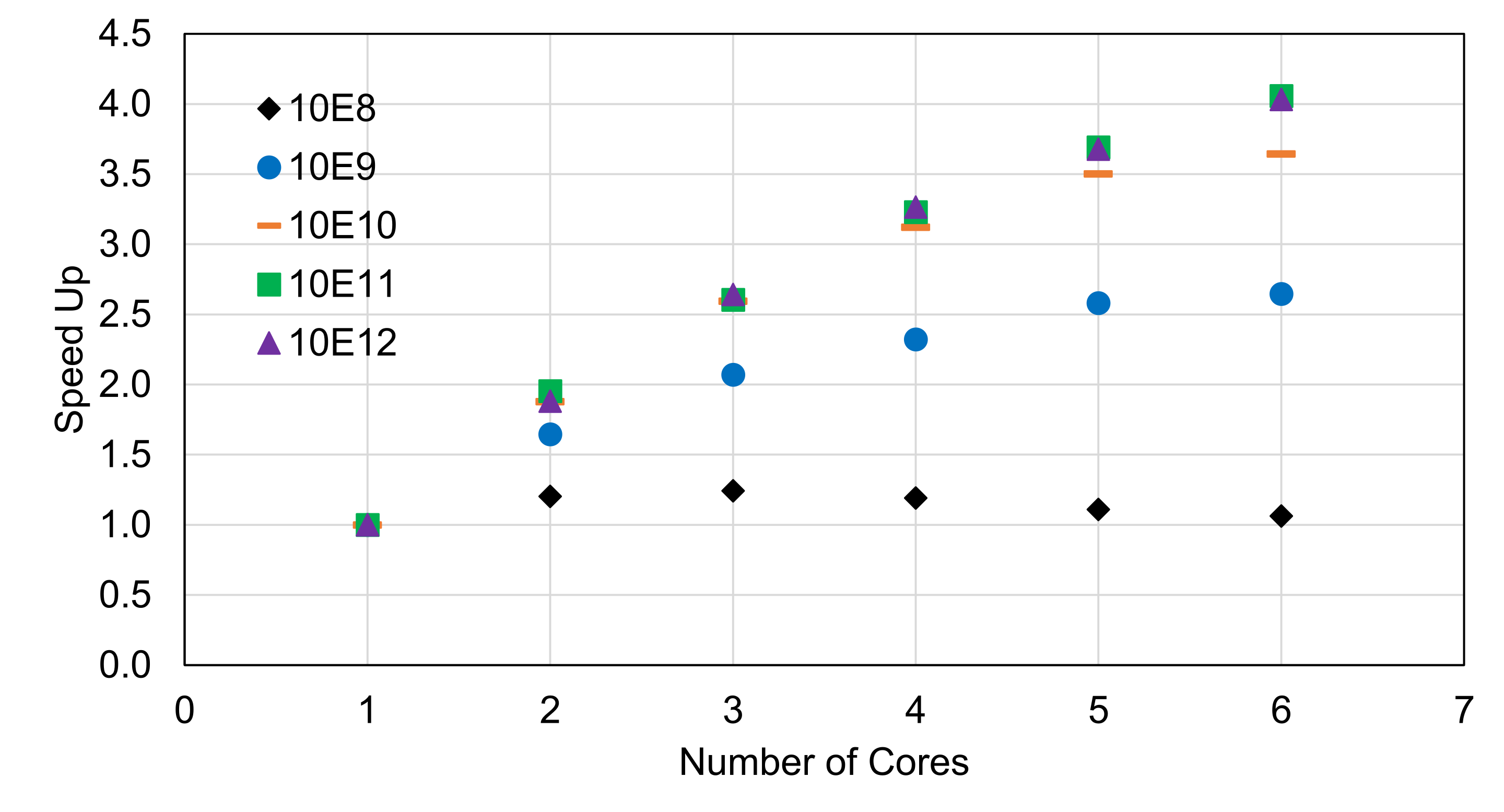 As shown in Figure 4, I ran several different numbers of flips to examine how speed up is influenced by problem size. For 10E8 flips, there is very little speed up across the board which suggests that the problem size is not large enough to overcome the parallel overhead. For flips 10E9, 10E10, and 10E11, the corresponding scaling increases. For 10E12 flips, the scaling is nearly exactly the same as 10E11 flips.

For compiling C++ and Fortran code on Windows/macOS/Linux, I recommend downloading Intel Parallel Studio XE 2018 which is free for students with a .edu email address. For writing C++ and Fortran code on Windows 10 and macOS, I recommend downloading Visual Studio IDE which is also free for students. There is a bit of a learning curve with writing code, compiling, and optimizing your code with Visual Studio, but in general, it’s easier than using g++ or gfortran with a standard text editor. You will need to install the Intel compiler first and then install Visual Studio second with a special option selected (“Desktop development with C++”).. Here are links to a C++ cheat sheet and a Fortran cheat sheet.

The best Python distribution is Anaconda Python and it’s available on Windows, macOS, and Linux. If you’ve never used Python before, I recommend using Python 3.6 and sticking with that for a while (even if 3.7 comes out). I’m still on Python 2.7, but I’ll make the move soon. The best way to code Python is with the Spyder IDE (included in the Anaconda distribution). Those coming from MATLAB will feel more comfortable with Spyder since the UI is similar. Another reason to use Spyder is that it forces you to use best practices (indenting properly, etc.) and tells you when you’re missing something or made a mistake prior to running. Here is a Python cheat sheet.

Julia is still in beta (v0.6.4) so any examples or books you find may not be exactly correct. Google is your friend. The Julia website lists several ways to run Julia, but the way I’m using it is JuliaPro which includes a customized Atom editor called Juno IDE, a debugger, and many packages for plotting, optimization, machine learning, etc. Here is a Julia cheat sheet; it’s for an older version (0.4), but most of it probably is the same.